Sweet, buttery and fragrant with cinnamon

These Mexican Cinnamon Cookies go by the original name of Polvorones de Canele, which comes from the Spanish word ‘polvo’, meaning dust. This refers to the light cinnamon sugar ‘dusting’ on all the cookies. They’re traditionally served at Mexican weddings but you can find them any time of the year, as everyone loves their sweet flavor and buttery texture.

I first discovered them at an experimental coffee bar in my neighborhood! These buttery Mexican cookies are usually made with butter, flour, vanilla extract, powdered sugar, salt, and cinnamon. The dough is rolled into small balls, which are then coated in cinnamon sugar before being baked.

To make Mexican Cinnamon Cookies, you will need the following ingredients: 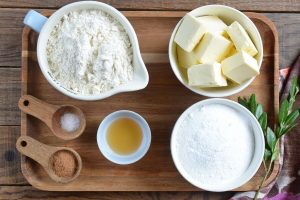 Sweet, buttery and fragrant with cinnamon, these Mexican Cinnamon Cookies are easy to love! Have a go at this easy peasy recipe and tell me if you agree!

Bethany is very passionate about maintaining a healthy lifestyle and clean diet. She’s trying to cut meat out of her diet as much as possible and focuses on cooking vegetarian food and fish. Bethany gets a kick from finding ways to add new twists to classic dishes. What’s more, thanks to her Asian roots, she’s great at combining different cuisines to come up with something extraordinary. Bethany’s recipes will inspire you to add new colors and flavors to your everyday meals.